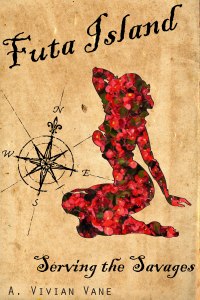 Now available on Amazon, Smashwords, and other online retailers.

Beautiful, shipwrecked Aela has been taken prisoner by a tribe of very strange women…women with the endowments of men, in exotic and varied combinations!

Forced to serve as the tribe’s slave, Aela struggles to adapt to the many uses and abuses the muscular women dream up for her. But beneath her show of servitude lies a clever merchant’s mind, seeking value and bargaining power anywhere she can find it…

Introduced in “Taken by the Tribe,” the Futai tribe and their captive elf-maid return for another jungle adventure story, even rougher and wilder than the one before! Fans of swashbuckling, gender-bending fantasy should look no further than Futa Island, the latest series from A. Vivian Vane.